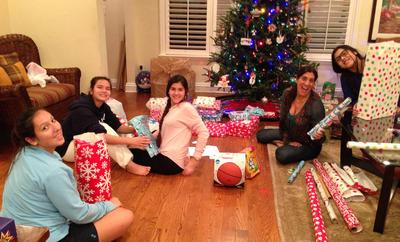 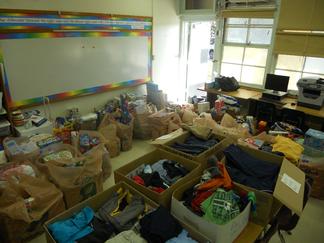 "Count me in for next year."

We commit ourselves to providing the youngest citizens of Miami

with a little hope to have in their hearts.

Join us in supporting our mission.

It all began during the Holiday Season in 2006.  Our work site was collecting food items to help several families from our own school get through the Holiday break. For a special treat the children were going to receive one new toy.  The number of children on the list was astonishing so the teachers volunteered to help.  I was given a piece of paper that read "Girl age 6."  I knew this little girl came from a large family of seven so I wanted to be sure to give a gift that was comparable to something one of her sisters would receive.  When I went over to their box I saw a hair brush set, a note pad, and a plastic doll. My heart almost fell out.  There must be something more to give. From that moment I knew that if my own daughters got just a little bit less from each of their uncles, aunts, abuelos and Santa, maybe these children can get something they truly wanted.

The minute I got home, I sent emails to my family, friends and local businesses. What I found was a community of people that wanted to help.  We raised enough money to buy 61 children three toys each!  It took several hundred hours to collect, buy, wrap and distribute these toys.  Even though we exceeded our goals, it turns out that many families were in need of more than food and toys.  So our mission began.

Ready2Give Mission: Our mission is to provide relief to the diverse needs of Miami's youngest members, the children. Through the "Five Star Agreement", parents are committed to having an active participation in their children's education. We will promote awareness in the community that all children deserve to be given the opportunity to acquire their fullest potential through confidence and integrity.

Lourdes "Luli" M. Rudd, President. Full-time teacher serving Miami-Dade County Public Schools for 27 years. Graduated from the University of Miami with Bachelor of Arts & Master of Science in Education. As a native of Miami, Luli believes in taking care of her community's children first.  What started out as a simple collection of toys turned into a powerhouse of community support.  In October, 2010, Luli started Ready2Give, Inc., to provide an avenue for the general public to give back to our great city.

Jorge Planas, Treasurer. Founding partner of Urban Environments Design Group (formerly DPZ Latin America), an urban planning and architectural design firm. He previously worked ten years at the internationally recognized firm of Duany Plater-Zyberk & Company (DPZ).  Jorge received his Bachelor and Masters at the University of Miami  School of Architecture.  While attending the University, Jorge began dedicating his time and energy working with the Children’s Home Society of Florida, first as a hands-on volunteer and later as a member of the Board of Directors.  During that time he was awarded the Young Leadership Award by the Dade Community Foundation for his philanthropic efforts.  Jorge is proud to be a part of Ready2Give, Inc. and continues helping the children from Miami.

Elena Arguelles, Secretary. Retired from Miami-Dade County Public Schools after 35 years of dedicated service. Received a Bachelor's degree from the University of Miami and a Master of Science in Urban Education from Florida International University. Continues to give back to the Miami community by being a school volunteer, participating in toy and food collections, and cooking generous meals for her large family. Elena was thrilled to be given the opportunity to help Ready2Give, Inc. become a reality.